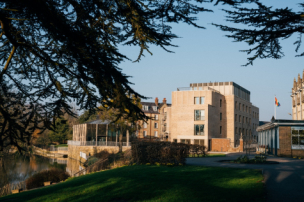 Statues of the founders, Nicholas and Dorothy Wadham, as seen through the College entrance

Wadham College was founded in 1610 in the reign of King James I by Nicholas and Dorothy Wadham.

Nicholas Wadham, a member of an ancient Somerset family, died in 1609 leaving his fortune to endow a college at Oxford. The hard work of translating intentions into reality fell on his widow, Dorothy, a formidable woman of 75. She fought all the claims of Nicholas' relations, lobbied at court, negotiated the purchase of a site and drew up the college statutes. She appointed the first Warden, Fellows and Scholars, as well as the college cook, to such effect that the college was ready for opening within four years of Nicholas' death. She added considerably to the endowment from her own resources, and kept tight control of its affairs until her death in 1618, although she never actually visited Oxford from her home in Devon.

During the Wardenship of John Wilkins, 1648-59, Wadham became a focus of scientific interest within Europe. The College became the regular meeting place for the nucleus of experimenters who, after 1660, became the Royal Society. This informal ‘Philosophical Club’ of astronomers, anatomists and chemists met at the Warden's Lodgings as friends of Wilkins.

The College was founded for men only, and it was not until 1974 that the statutes were altered to allow the admission of women as full members at all levels; Wadham was one of the first Oxford Colleges to make this change.